Another Summer says Goodbye at the Cape 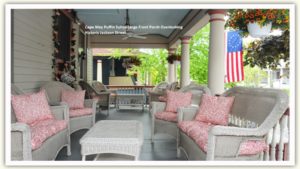 Well its here…the final in-season week in Cape May. Its shoulder seasons last gasp. I am writing this on my front porch overlooking Jackson Street. My front porch is my favorite place to sit back, relax, people watch and reflect on the day. Today was a typical late summer seashore day with cooler air and a nice ocean breeze My dog had a perfect dog day. He sat by my side and watched other dogs stroll on by with barely a grumble. He has the good life, lots of treats, friendly rubs above his tail from dog lovers and walks throughout Cape May everyday. We have come to know other dog lovers just by the way he reacts to people he meets. He turns his back to them for a good rubbing. But I digress…

Summer is fading and Fall is knocking. This summer has been very busy. I cant remember a time when Cape May was so busy. It seems as though the secret is out. Cape May is a slice of what is good about life. The town has all the charm and character of a past many of us still yearn for. We read books and watch shows hoping to feel a warmth of the past in our distant memories of when we were young.  Cape May does it for me by just by being here in the now. I enjoy the people, there is a constant bustle of life on my street. The horses come by with a clop, clop that makes things just right at that moment. Can it get any better right now I ask myself?

We will be getting ready for the fall and winter season shortly. October brings the annual Oktoberfest on our street. Beer and Bratwurst…Yes it can get better. December brings my favorite time. Norman Rockwell and I get together in small town America and remember what a wonderful life it really is in my little slice of heaven.

This beautiful stretch of beach at the end of Cape Island, along the Delaware Bay, draws visitors looking for natural pursuits: bird watching, sunbathing in the nude, picking beach plums, picnicking with the family, hunting for Cape May diamonds, walking the dogs, fishing and hunting. Higbee is a location for some of the best bird watching in the world. Botanists have been visiting for decades searching the dunes for nearly extinct brambles and flowers.

Higbee Beach Wildlife Management Area on the Cape May point area is one of the United States largest migrations each fall as millions of birds arrive for food, cover and water. Higbee Beach provides migrants with a place to stopover as they increase their fitness before continuing their journey south.

The Thousand plus-acre area is  a unique blend of many different habitats. The Endangered and Nongame Species Program, in cooperation with the Bureau of Land Management helps manage the fields and scrub-shrub areas for the many migrating songbirds and raptors.

Visitors can see the vast stretch of Higbee Beach, containing the last remnants of coastal dune forest on the bay shore. The dunes are as high as 35 feet high in some places, the beach cliffs dropping down to the shoreline. The tress and shrubs of holly, red cedar, sassafras, persimmon, northern bayberry, scrub oak,  black cherry,  and beach plum help stabilize the dunes, despite winds that whip across the 12 mile wide bay, at its confluence with the Atlantic Ocean.

Visitors interested in viewing the spectacular migration should come to the WMA following a cold front with northerly winds. All you need is a set of binoculars and ID books. Note, Higbee Beach is also home to lots of dragonflies and butterflies, including the long-distance migrant – the Monarch butterfly.

The Cape May Historic District was officially listed on the National Register of Historic Places in 1970 and then became a National Historic Landmark District in 1976. This allowed the community to protect the  most valuable resource for their community, the homes. The architectural wonders are now protected by laws. No historic homes can be remodeled or changed without historic commission review and  approval.

Cape May has one of the largest collections Victorian Era buildings left in the United States.

The City of Cape May is known as the oldest Sea Shore resort in America.

In the 18th century the whalers and farmers created a sustainable economy that formed the foundation for the flourishing sea-side resort that grew to international fame in the 19th century.

Cape May began to flourish as a resort after the War of 1812 when regular steamboat traffic on the Delaware River picked up passengers at New Castle, Delaware. In 1816, Thomas Hughes built the first Congress Hall Hotel at Cape Island. To this date there is still a Congress Hall hotel in Cape May.

In 1830 a contemporary writer comments: “Cape May Island is a noted and much frequented watering place, the season at which commences about the first of July and continues until the middle of August or the first of September. There are six boarding houses, three of which are very large; the sea bathing is convenient and excellent, the beach affords pleasant drives and there is excellent fishing in adjacent waters.”

While Cape May flourished as a resort, famous for its atmosphere and entertainments, a number of famous hotels were constructed but they were vulnerable to fire and the great 1867 fire demolished two city blocks.

Cape May has a number of excellent examples of the elegant Homes. The original architecture is evedent throughout the historic district.

Cape May still maintains the old flavor of past elegance and romance. Gas lit streets line the sidewalks and families stroll up and down the streets admiring the wonderful old homes. Its as if they are stepping back in time to a day when horse carriage ruled the streets.

Appointments are available at our office location only:
905 Page Street, Cape May NJ 08204

This is a favorite weekend event for the food lover.

Cape May Restaurant Weekend is a four-day weekend event.  The weekend is smaller version of the annual eight-day June restaurant week. Enjoy  your choice of appetizer, entree, and dessert for just $35 per person. No tickets are required.

The eight-day event that takes place every June. Lunch and Dinner specials at a fixed price.

Visit any participating restaurants during the event (please see days/hours on restaurant listings for any restrictions) and you’ll be presented with their fixed-price menu in addition to their regular menu.

Below is a list of Cape May Services
Hospitals
Cape Regional Medical Center
(15 minute drive)
Stone Harbor Blvd & US Hwy No 9, Cape May Court House
609-463-2000
https://www.caperegional.com/

Where can I buy beach tags in Cape May? In season, beach tags can be purchased at any beach entrance from beach taggers. A maximum of five (5) seasonal tags, per individual may be purchased.

How can I buy beach tags by mail?. To order beach tags, send a check to 643 Washington Street, Cape May. There is a flat $3.00 shipping fee per order. A maximum of five (5) seasonal tags per individual may be purchased.

Dog-Friendly Beaches in Cape May

Dogs are allowed through the months of November, December, January, February and March. Dogs must be kept on a leash at all times and be accompanied by their owner or caretaker. The owner or caretaker shall carry a dog waste disposal device. Any owner or caretaker of a dog who permits such dog to leave animal waste on the Boardwalk, Promenade, beach without disposing of same shall be subject to penalties.

Dogs are permitted from November 1 through March 14. Dogs must be leashed at all times on a leash no longer than 6 feet. Dogs must be accompanied by an owner over 12 years of age. Dogs are prohibited at Cape May Point State Park and the Cape May Migratory Bird Refuge in an effort to protect vulnerable chicks of the federally-threatened Piping Plovers and Least Terns.

Allows dogs from September 1 to April 30. Higbee is owned by the State of New Jersey and is open from 5 a.m. to 9 p.m for all visitors and their pets to use.

Leashed animals are permitted anytime of the day during the off-season. Animals are prohibited at the beach between the hours of 11:00 am and 4:00 pm in-season (Memorial Day – Labor Day). Dogs are to be leashed at all times when they are off of the premises of the possessor and it is mandatory that people clean up after their animals. Lower’s beaches run along the Bay coast and are quite narrow compared to Cape May’s. Follow directions to the Ferry terminal, then make a right rather than turn into the Ferry complex.

Cape May Parking with Parkmobile

Parking just got a little easier in Cape May.

Parkmobile, LLC and the City of Cape May have started a program that allows visitors to use their phones to pay for parking at  parking spaces in downtown and along the beach. You can download the Parkmobile app via iPhone, Android, and Windows.

Customers can register for free through the downloaded app or at www.parkmobile.com. Once registered, you can use the mobile app, internet, or call the toll-free number listed on the Parkmobile meter stickers

Once you set up an account, you are then able to start using the system with a registered mobile device. Parking enforcement officers can see that a motorist has paid with Parkmobile using a wireless handheld device.  Metered time limits  do still apply.

Visitors can receive alerts when the time is about to expire.

Parkmobile is the latest technology available for metered locations. The ease of use and the overall function make this a win win for anyone parking in the downtown area.

Christmas in Cape May

Christmas in Cape May is like stepping back in time to the days of Norman Rockwell.

Here are a few wonderful things to do in Cape May during the Holidays.

The First Saturday in December, the parade starts off at 5 p.m.  from the WCM Volunteer Firehouse and winds its way through Cape May

Located at the Rotary Park Gazebo/Bandstand, Lyle Lane, behind the Washington Street Mall, for the Cape May tree lighting. Santa is ready and waiting for the tikes.

Yep. We light another giant tree in Cape May. Located at Congress Hall

The jewels in the crown of the holiday season!

A member of the East Lynne Theater Company regales you with a Victorian holiday ghost tale as you ride through Cape May’s festively decorated Historic District.